The area around the Station had numerous small mines and lime-kilns – up through Glencryan and around the area of Palacerigg. Legend has it that the Romans fired their tiles and pots from the fire-clay in this area. Glencryan in Gaelic means “Little Clayey Glen”. It was not until the early 19th century that surveys determined great beds of fire-clay of a particularly high quality between Glenboig in the west and Linlithgow in the east.

Despite its name, fire-clay is a hard rock and has to be mined at depth by blasting and drilling like coal. Indeed fire-clay seams are associated with the geological Coal Measures. Bricks made from fire-clay can withstand temperatures of 1500 0 C without changing shape and without cracking as they cool. Fire-clay is thus essential for firebricks for industrial furnaces, and for strong glazed pipes, pots and tiles. Read more here

With rich seams of fire-clay near Abronhill, Glencryan and Palacerigg, and a railway alongside, the opportunities were seen for developing a fire-clay works at Cumbernauld Station. The Cumbernauld Fire-clay Company was founded, in 1874, by James Wallace and Matthew Goodwin. The Works were built alongside the Caledonian Railway with fire-clay from Abronhill. In 1882 the Works were sold for £4000 to the newly formed Glenboig Union Fire-Clay Company under James Dunnachie. The share holders are told that Cumbernauld “possesses a clay field practically inexhaustible of unapproachable quality”. More here on the Brickworks and the Glencryan fireclay mines. 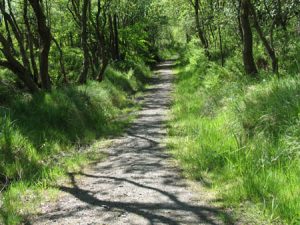 Anyone who walked up Glencryan Road during the 50s and 60s would have noticed bogies being pulled along tracks by a cable. The bogies were loaded with fire-clay rock at Palacerigg and hooked onto a continuous moving cable powered by a steam engine situated at the Cumbernauld works. The bogies were pulled through the Glencryan Woods, over the old Forest road and tipped out at the works. The empty bogies were hooked back onto the returning cable. There are some interesting videos on YouTube where a few intrepid explorers have entered the mine. The old brick tunnels are fascinating and there are scenes the pump room and old bogies. Check this site

The railway had provided limited opportunities for work but by 1872 the Station had been built. The brickworks opened in 1874 offering many new jobs. No doubt workers travelled from east and west by train to work as miners and fire-clay workers. The first villa in Greenfaulds was built in 1877 and before long there was a vibrant community with families working in the City, farming, the railway, small business and shops. There was a school in 1886, a post office and a Village Hall by 1893. A granary and mill was opened in 1903.

We greatly appreciate permission to use photos of Cumbernauld taken by Douglas Campbell during the 50s and 60s.