Glenhove or Glenhuve “of or beside the cave,”  certainly a glen of caves. 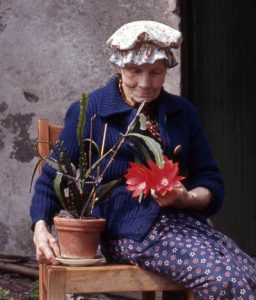 Glenhove was one of our favourite haunts as we grew up at Tannoch. At that time it was farmed by the Lorimer family and with our friend John Gardiner its barns and outhouses were often the site for many games of “cowboys and indians” or “kick-the-can”. The Lorimer twins lived there with their Uncle Willie and Grampa and Granny Lorimer. They were a kindly old couple and lived very simply. We often helped picking gooseberries or blackcurrants in their large farm garden, earning a few pennies for every pound picked. Or sometimes, with others, helped to harvest potatoes (tattie-howking) – really back-breaking work and I don’t think we did that too often. It was a busy farm with milking morning and evening, root crops, haymaking and cornfields.

Glenhove Cottage was home to the Gardiner family and as they had a television long before we did, almost every evening after school we trekked across the fields to watch various Children’s programmes – like Robin Hood; Lassie; William Tell; The Lone Ranger, Circus Boy, etc. On odd occasions we were joined by our parents on a Friday evening went to see programmes like Rawhide or David Nixon’s magic show. We got our first TV in 1962!

In the Scottish Record Society Register of Testaments 1564-1800 Commissariot of Hamilton and Campsie, there are records for: Isobel Inglis, spouse to John Lennox, in Glenhove, par. of Monkland – 6 Apr. 1676 and Jean Oswald, relict of James Cleland, of Glenhove, par. of East Monkland – 2 Jan. 1679

William Thom, sometime in Southmyvet* and last in Craighead of Glenhove, par. of Monkland 4 Sept. 1712
*A small farm near Mollinsburn Lanarkshire. There is still a present day Myvot Road

Craighead is marked on OS maps published in 1864 alongside a quarry. It is described in the OS Name Books of 1860 as a small farm building. It is the location of the building now known as Craigelvan on the hill south of Glenhove.

Who were the Marshall’s?

A James Marshall appears in the land tax rolls of 1645-1831 farming at Annathill. The tax is one of the highest in the area at £130.00. John Miller at nearby South Myvet paid £45.00. There is also the following reference in the OS Name Books of 1860 to a Tomb close to Annathill Farm: A short distance to the N.W. is a small enclosed piece of ground, in the centre of which is a tomb belonging to the heirs of a former proprietor named Marshall. A Stone in the tomb bears the following inscription – “James Marshall. his tomb, and Childrens, with roads to it not to be “Sold”. It was erected in 1786. 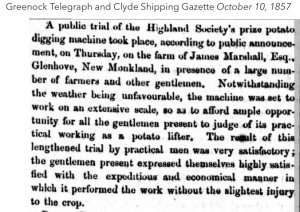 In the 1851 census James Marshall (b. 1809) was a farmer of 60 acres at Craighead of Glenhove and married to Margaret Brown. James was son of William Marshall. By 1857 James was farming at Glenhove – now a farm of 120 acres. It had been a farm of 36 acres so it appears that he had absorbed other properties like Craighead into the estate of Glenhove. He also owned a number of properties around Glenhove. In 1857 it was the venue for trials of a new potato digging machine, so they were at the forefront of new technologies. “The gentlemen present expressed themselves highly satisfied with the expeditious and economical manner in which it performed the work without the slightest injury to the crop.”

Their eldest daughter Anne married Thomas Gilfillan in 1867. They also had sons called Henry, James, Thomas, John and Frederick.  Following the example of their predecessor James Marshall of Annathill, they also built a family tomb that appears on maps surveyed in 1859. As we grew up, we knew it was there -but never went near it! It is still there but now very much overgrown and with a tree growing through the roof. Who knows if it was ever used as a tomb?

James and Margaret’s son Henry Brown Marshall was born on the 21st Oct 1852. He was educated at Dollar Academy and in due course he became Manager of Nether Johnston Colliery, near Glasgow, an experience that would be useful later on. In 1878, after an illness, he was advised to live in a dry climate. As one of his sisters had married in 1874 William McLaren, a leading citizen of Heidelberg, Transvaal, he decided to join them.

Henry set up a transport business and invested in land. It was a good investment as his £1200.00 purchase was soon valued at £4 million due to the Gold Rush. He married Anna Maria Rissik and they had six children. At one time he owned significant tracks of land in what is now Johannesburg and gave his name to a new settlement called Marshalltown. Without commenting on the rights or wrongs, he was instrumental in establishing the famous Rand Club with Cecil Rhodes. In 1896 Henry Marshall of Glenhove was given a reception banquet in London following his return from being a prisoner in Pretoria. Towards the end of 1895 the grievances of the Uitlanders culminated in the formation of the Reform Committee. Henry was on the wrong side of the reform dispute and spent a brief time in prison.

On his return from South Africa, he bought a property called “Rachan” near Peebles and became a Justice of the Peace and a Deputy Lieutenant of Peeblesshire and Vice-Lieutenant 1926-1934. He was also Vice Convenor of the Peeblesshire County Council 1902-32 and held a number of other public positions. Over the years he and Anna travelled extensively, mainly to and from S Africa. He died on the 21st July 1948 aged 95 in Edinburgh Royal. For a full account of the life of Henry Marshall see this page.

Henry Marshall retained ownership of Glenhove right up to 1918 at which time, with Glenhove, he put the following premises up for auction – Lenziemill, Waterhead, Greenside, Sandyknowes, Tannoch, Glentore and Torbrex thus bringing to an end almost 70 years of the dominance of Glenhove in the area.

The new owners were the Lorimers. (More to follow in due course) 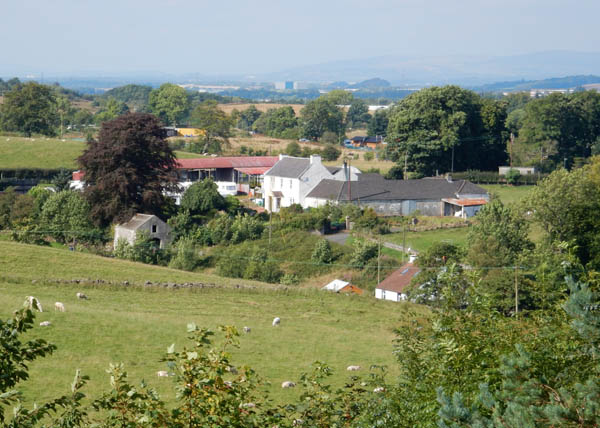