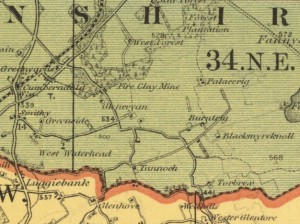 In years gone by, the area now occupied by Palacerigg Country Park had several “farms” and dwellings. It was largely scrub land and poorly drained so farming may have been limited to self-sufficiency and sheep. But there are early references to mines and lime kilns and this is likely to have been the main economy of the area prior to 1905.
In the Scottish Record Society, Register of Testaments 1547-1800 there is a reference to “William, youngest lawful son of the deceased John Paul, in Burntrig, par. of Cumbernauld 27 Nov. 1786”. Burntrig Farm was located just east of the present cafe and information centre. There is mention of a Wester Burntrig and this may or may not be the site of the cottages on the service road into Palacerigg. 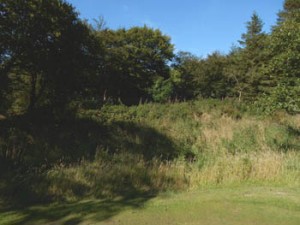 In 1841 the dwelling of Palacerig – as spelled at the time and previously referred to as Palaceridge, was located a few hundred yards north of present Country Park – as far as I can tell, at the end of the 7th tee (Lang Whang) on the new golf course. This has been located by overlaying old maps with present-day Google satellite images.
It 1841 it was occupied by Robert Warden (30) born 1811. He was there with his wife Mary (no details); Robert Warden (12); John Warden (10); Agnes Warden (5) ;Jean Warden (5); Mary Warden (4).

In 1851 it was occupied by John Carrick (44) born 1807 in Shettleston. Married to Mary Carrick (38) from Calton, Glasgow; William Carrick (21) worked as an Engine Keeper; James Carrick (19) and John Carrick (17) worked as a miners; Joseph Carrick (15) was an engine keeper; also Nathaniel Carrick (13); Mary Carrick (9); Margary Carrick (7); Elizabeth Carrick (4); Thomas Carrick (3). The mention of “miners” and an “engine keeper” suggests that the main activity was in fact clay mining, whatever elements of farming might also have been undertaken. This was the area where clay was later mined for the Fire-clay Works at Cumbernauld Station. 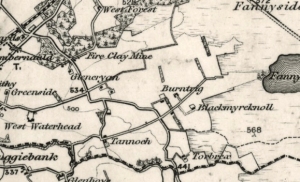 The early Palacerig is not shown on a map published in 1904, but a fire-clay mine is.
In addition to Stonylee Cottage on these early maps, there is also Blackmyreknoll Farm. The present Clubhouse has been built on the site of this farm and apart from the map overlays clearly confirming this, there are physical signs in the form of an old well just by the main entrance. 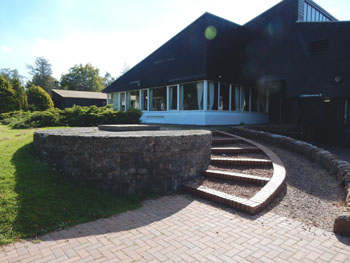 In 1861, recorded as Blackmuir Knoll, John is now 73 and his sister Janet Aitken is there as a housekeeper. William is still there. Agnes Brown (14) is working as a dairy maid. There is also a young John Aitken listed as a lodger born in 1854. I suspect that he was a nephew of John on a visit as he also appears in the census as the son of Andrew and Jane Aitken from Airdrie. In 1891 there is a John Aitken, born in Cumbernauld, married to Maggie in Clydebank and working as an shipyard iron dresser and still in that job in 1901.

In the Falkirk Herald of November 28th 1888, there is a report of the death of William Aitken at the age of 75. He was found in a field near to Tannoch having been to visit a Mr Dunlop at Waterhead and seems to have lost his way in “frightful darkness”.

In 1905/6 it was all change for Palacerigg as it became a labour colony and a new building was erected and still remains. The adjacent photo shows the farm building as it was in 1969. At that time Palacerigg was a large and active farm of several hundred acres, one of the biggest in the area. The old farmhouse is now hidden from view by trees.

The Labour Colony (largely drawn from a leaflet published by North Lanarkshire Council Countryside Ranger Service)
The Unemployed Workman’s Act of 1905 prompted the setting up of Distress Committee’s in the cities to alleviate hardship caused by unemployment. There was no National Insurance or Unemployment Benefit so the threat of starvation was very real. Glasgow’s Distress Committee wanted to establish a farm colony to provide work and bought Palacerigg from local sheep farmer, Mr Robert Chapman for the sum of £7,250.

Self-sufficiency was the main objective. The men would live on the farm, work voluntarily and produce food for themselves and their families. Buildings to house the men were quickly built and the first batch of 90 “colonists” arrived. Initially it was thought that men would work for 8 weeks and be replaced by another 90 men. But, with rapidly escalating employment in 1908, the Committee was swamped with work requests and felt compelled to take on many hundreds as relief workers, transporting them by train. Every morning at Cumbernauld Station, 800 men would disembark and march up the hill to start the days work – cutting peat, reclaiming moorland and growing various vegetables.

Selection for this scheme was tough. Only married men with children and a good reference from their last employer were chosen. In return for this opportunity each colonist had to agree to the following: “accept the work given to him, and that he receive in return his food, lodgings and laundry service, 6d a week for tobacco, furlough every second Saturday afternoon to Monday morning, with return fare to Glasgow; the wife or mother to receive 8s per week for their own maintenance, and 1s 6d per week for each child.”

Palacerigg was initially bought as a stock farm, but within two years the sheep and cattle were sold to concentrate on peat cutting and the cultivation of vegetables – particularly potatoes, carrots, turnips and cereals (oats, wheat, rye). Unfortunately, most of the land was poorly drained, acid, moorland so an ambitious land reclamation programme began. Hundreds of daily workers played a key role in this by building a railway line, roads and ditches for draining fields. From 1907 to 1912, the area of land under cultivation rose from 16 to over 200 acres. Ninety acres were reclaimed and 4 miles of roads were built in just 18 months.

The conveyance of materials to the colony for development and the transport out of surplus crops and peat was all-important. The North British Railway Company gave permission for the colony to build a line from Palacerigg to connect with their Dykehead branch line in 1908. Originally it was intended to run it from Palacerigg centre but in the end it was limited to just one mile from the south-west edge of the farm near to Fannyside Loch. After completion a locomotive with wagons was then hired and a light narrow-gauge railway was laid out to run small bogeys of ash out to the reclaimed fields. Fifteen Clydesdales were also kept on site for haulage, carting and ploughing.

Palacerigg was visited in 1910 by Lord Pentland (Liberal Secretary of Scotland) as recorded in The Annual Index to the Times (1910). He took the oath of office in May 1910; was received by the King on June 14th; “visits labour colony at Palacerigg”, possibly Sept 17th and on Sept 27th went on to spend a week at Balmoral;

In 1910 James Nicol, the colony superintendent, was keen to make a start on peat production and a baling machine was installed which handled 10 tons of peat a day. Peat was used mainly for horse bedding and also burned as fuel. A national coal shortage after the First World War prompted a fresh look at supplying Palacerigg peat for the Glasgow market. At the Modern Homes Exhibition in Sept. 1921, 5,000 bags of peat for burning were sold and a further 7,000 sold in Glasgow over the following month. During the 20s and 30s Palacerigg became well-known for its peat products, and for its fire-lighters. A fire-lighter factory was built in 1923. Blocks of dried peat were cut into thin slices and dipped in napthaline. They were then packed together by women employed to work in the factory. By the winter of 1924, Palacerigg was selling 15,000 fire-lighters every week through agents in Glasgow and London. Three years later the first machines were installed to increase production. The Distress Committee Chairman, John Stewart also reported in 1924 that they had a few million tons of moss litter from which they were attempting to extract valuable oils.

However, it was not all plain sailing for the colony. In 1924 hundreds of men walked out complaining about the curfew of 10.00pm every night. The Distress Committee refused to yield, and the colony was closed and reopened the following week with new men.

On the 10th Oct 1926 The Sunday Post reported the following: “Fire broke out last night at the Palacerigg Labour Colony, South Cumbernauld, belonging to the Glasgow Distress Committee, when a shed containing a sawmill and a mixing plant connected with the manufacture of firelighters was destroyed. The damage is estimated at £800. A detachment of the Glasgow Fire Brigade was summoned to fight the conflagration.” 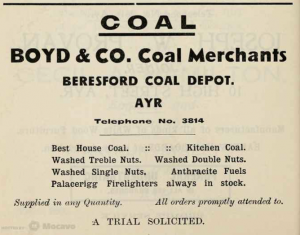 1930 saw the end of the Distress Committee and the residential aspect of the colony. The scheme was transferred to the Public Assistance Department of the Glasgow Corporation. From 1930 to 1945 up to 288 acres of land were advertised for annual let in several lots. As the economic depression of the 1930s tightened, many unemployed men were brought out again from Glasgow, but this time by bus. Up to 26 coaches arrived every morning. Peat products continued to be sold, while vegetables were grown and used by the Corporation to supply institutes. At the end of 1930s the Unemployed Workers Union abolished the colony, transferring workers to urban relief schemes.

In the Post-Office Annual Glasgow Directories of 1921 to 1928, Thomas Spence is listed as “clerk and treasurer, Distress Committee; manager, Labour Colony, Palacerigg, Cumbernauld”
Unfortunately, with the advance of modernisation in gas and electricity the demand for peat and firelighters fell. During the War the baling mill burned to the ground. No attempt was made to revive either the colony or the peat cutting operations in the post-war period.

1930 brought changes to Palacerigg. The colony was loosing money, The Distress Committee was abolished and Palacerigg handed over to the public assistance department of Glasgow Corporation. It was decided to sell Palacerigg as a going concern and it was offered to James McKenzie who was at that time the Superintendent for the sum of £11,000 (eleven thousand pounds) to be paid through a bank bond. Mr Mckenzie declined the offer – which he later regretted – but suggested he should manage the colony for one year to prove he could make it pay. His outlined plan and offer was considered by the Public Assistance Department and this was accepted. James McKenzie’s plan was quite simple, he would select the workers, gangers, and materials. He let out the arable fields to farmers for cattle grazing. Workers were bussed daily to and from Glasgow. He introduced new methods of reclaiming land, such as drainage and making manure and better roads. He also introduced a new formula for firelighter and bulb fibre. In one year Palacerigg was making a profit for the Public Assistance Department.

James McKenzie was retained as Superintendant / Manager until 1946 when he retired at the age of 68 years.” 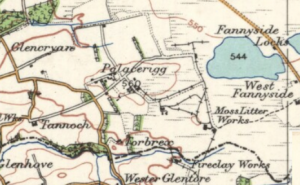 ==
A 1926 map shows Labour Colony and just to south-east a Moss Litter Works. Note the extensive rail network that connected to the main line near Slamannan.

1940-49 There were continual representations made to the authorities for Palacerigg children to be transported to school. It was repeatedly judged that they were less than 3 miles from school so had to walk. In 1945 Mr James McKenzie of Palacerigg was one of the father’s to strongly argue the case and was able to prove that the route the children had to take was just over three miles. Sadly, in 1949 his 18 year old daughter Jemima was one of 13 young women to die in a huge fire in Grafton’s Store, Glasgow. Her sister Jessie (16) escaped with minor burns. Jessie had been the Carnival Queen in 1947.

** We greatly appreciate permission to use photos of Cumbernauld taken by Douglas Campbell during the 50s and 60s. We all owe him a debt of gratitude for preserving memories of scenes that were once so familiar to many of us.