“The name of Cumbernauld is derived from the Gaelic Cumar-n’-ald, signifying the confluence or meeting of rivulets, and this appellation is descriptive of the place, as several brooks unite their waters near Cumbernauld house. The castle of Cumbernauld was a stronghold of the Flemings, earls of Wigton during the fourteenth century, and afterwards of the Flemings of Bigger and Cumbernauld, who became earls of Wigton. This castle has given place to a modern mansion, which forms a more commodious habitation in more peaceable times.”

The above quoted from: Caledonia, or, An account, historical and topographic of North Britain from the most ancient to the present times > Volume 6 > Author: Chalmers, George, 1742-1825 – Page 865

Comyn Castle
The first castle was owned by the Comyn Family and was granted to the Fleming family after Robert the Bruce killed John ‘the Red’ Comyn in 1306 in Greyfriars kirk. The Motte of this Motte and Bailey castle can still be made out in Cumbernauld House Park just north east (approx 360 Metres) of Cumbernauld House. The Fleming family then constructed the second and larger castle on the site.

The Fleming Castle
When the Flemings came to construct their castle at the end of the 14th century, the best they would have been able to build would have been a strong stone tower. The country was much too impoverished to permit anything more ambitious, such as the great courtyard strongholds built before the death of Alexander III. Such a tower would have been an “L-Plan”, a rectangular block with a wing projecting at the end of one of the long sides. A few small timber or stone outbuildings would also have been attached. As time went on, and the power and influence of the family grew, the castle would have been enlarged by the addition of other stone structures, such as a great hall for festive occasions.

In March 1544, there was an unexpected English visitor during the War of the Rough Wooing, (December 1543 – March 1551), a certain Edmund Storey – a servant of Thomas Wharton, an English nobleman and a follower of King Henry VIII of England. Storey records: “On the morrow, in riding towards Stirling, we came to Lord Fleming’s castle of Cumbernall, and alighted near the castle gates, at which the Scotsman knocked and told the porter that a servant of the Master of Maxwell’s came with a message.” (Read more)

The site of this castle is where Cumbernauld house stands today and although the original tower has disappeared, blocks of its masonry can be picked out amongst the stones used to construct Cumbernauld House. Part of the courtyard buildings are still standing, particularly the wall that separates the lower service area from the car park. on the lower side of this there is a long row of corbels or projecting stones, of a distinctive 16th century pattern, designed to support timbers of a lean-to building.

As far back as 1553 we can read well-known place names in the Protocol Books of Dominus Thomas Johnsoun 1528-1578. 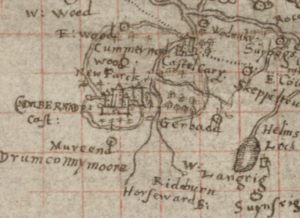 From the Gazetteers of Scotland, 1842 on page 282 – “Here, till at least 1571, the savage white cattle still ran wild, since in that year a writer complains of the havoc committed by the King’s party on the deer in the forest of Cumbernauld and its “quhit ky and bullis, to the gryt destructione of polecie and hinder of the commonweil. For that kynd of ky and bullis hes bein keipit this money yeiris in the said forest; and the like was not mentenit in ony uther partis of the lie of Albion.” 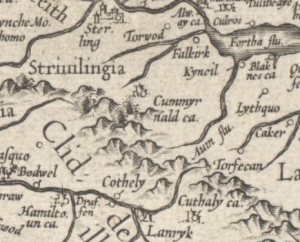 In the Nova Descriptio Praefectvrae Sterlinensis  of 1654 we read the following:
The family of the Barons Fleming live nearby at Cumbernauld, which they say was received from King Robert Bruce, for brave and loyal service in defending the country, whence too they gained the hereditary honour of Chamberlain of Scotland. Very recently also the kindness of King James VI brought the title of Earl to this family, when he created J. Baron Fleming Earl of Wigton. 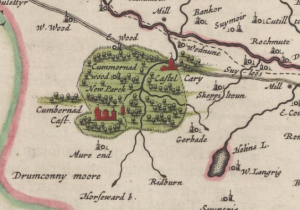 Page 913 – “The Virgin Mary’s chapel at Kirkintilloch became the church of the western parish, and a new church was built for the eastern parish in 1659 at Cumbernauld (e). For sometime after the division of the old parish the two new parishes were called Wester Lenzie and Easter Lenzie, but the former was afterwards named Kirkintilloch and the latter Cumbernauld from the places where the parish churches stood. The Earl of Wigton having acquired the patronage of the old parish, became of course patron of the two new parishes. Upon the death of Charles the last Earl of Wigton in 1747, the patronage of the parish churches of Kirkintilloch and Cumbernauld was carried by his niece and heiress, Lady Clementina Fleming, into the family of Elphinstone, and Lord Elphinstone is now the patron of both churches. The parish church of Kirkintilloch stands at the town of that name, which is an ancient burgh of barony that is ruled by two bailies, and now contains about 3000 inhabitants (g). The parish church of Cumbernauld stands at the town of the same name, which was created a burgh of barony in 1669, and now contains nearly 1000 people.

For a full outline of Cumbernauld history see Wikipedia