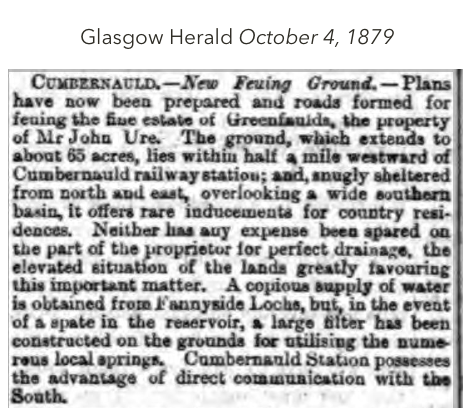 The farmers in Carbrain, Seafar and Greenside farms must have done a double-take when it was announced that land would be available for development in Greenfaulds. Apart from a few cottages around the area there was very little else. But the railway came through in 1848 and as happened almost everywhere else, when the railway came, so did industry, jobs and the building of new homes. The railway required workers and so did the new Fireclay works established alongside the railway – and Greenfaulds soon offered “rare inducements for country residences”.

Residents of Greenfaulds and Cumbernauld Station from 1841.
You’ll note that most of these people were incomers. It’s clear that many of the houses built in Greenfaulds were not occupied by individual families. Several families shared the address so they must have been designed as apartments with shared entrances – tenement style.

It appears the only people in Greenfaulds in 1841 were Farmers, originally from Lesmahagow – Gavin Sandilands (30) and his wife Ellison (25). Also recorded are Cecilia Clelland (20); Allan Ireland (15) and John Thomson (15), both agricultural labourers.

In the 1851 census several families are recorded as living in Greenfaulds. Patric Keef aged 49 lived there with his wife Rachell (38) and children John (9) and Andrew (1). Patric was from Ireland and worked as a quarry labourer. He would have lived close to the quarry at Kilbouie (Kilbowie), towards Luggiebank and may have worked there. There was another quarry in Glencryan.

1871 Census
John Ure (58) was from Glasgow and was married to Barbara Holmes (40). He was a master Baker. Family: Barbra Holmes (mother-in-law – 65 was a stocking knitter), Marrion Bell (20) born in Islay and was a domestic servant, John Ure (20), worked as a warehouse labourer. He became a commission agent in Perth; George Wm Ure (12), James Ure (8), Margaret Lena Ure (5), later moved to Perth; Arthur Anderson Ure (3), became a clerk in Perth. All children were born in Partick, Glasgow so in 1871 they were newcomers.

1889 Directory of Scotland – described as Gentry. By this time the community near the Station had become quite vibrant. There were regular Concerts in the new Southern District School (1886) and nearby Hall

(I recently made contact with two men who remember Tom White when they were boys.

David Boyle: Can remember Tom White bus took pupils to Croy station to get a train to go to Lenzie academy. On a Saturday night he picked up to go to first house pictures at Kilsyth. On way back picked up Croy men to have a drink in Cumbernauld then back to Kilsyth with a full load for the second house. Pick up first house punters back to Cumbernauld then pick up pub punters for Croy and on to Kilsyth. Pick up second house punters back to Cumbernauld. Great service never late. Well done Easy Osie. Hand pump horn – we used to say “here comes Tam White”.

David Boyle: Duncan Whyte remember being crammed on coming back to Cumbernauld after the second house pictures? Boys had to get out and push up the Smithstone Brae – slipping clutch. No fare refunded. Memories!

Duncan Whyte: He never left anyone, crammed everyone on. Always had a cigar.)

Frank Leckie (41) a fire-clay pipe finisher from England, married to Mary (40) from Hamilton. Their son Thomas (17) was a shipping Clerk.

Masonic Place, Cumbernauld Station – 1901. This building was located adjacent to the Station. It was three stories with the ground floor given over to small retail units and the upper floors were living accommodation. A few years later a granary was built next to the railway and the owner, Robert Stirling, later built the cottage called Millview.

Robert Stirling applied for planning permission to build Millview in 1903, the same year that the grain mill was built. In 1911 the grain mill burned to the ground, probably a wooden construction. The Kirkintilloch Gazette reported on the 11th August as follows: The buildings, which were comparatively new, being erected about eight years ago, were equipped for an extensive business, and consisted of three large blocks, comprising lorry and cart shed, engine shed, and general store in one block; machinery for hay cutting and for bruising and grinding graininess another; and there were also hay loft. offices, and stables.