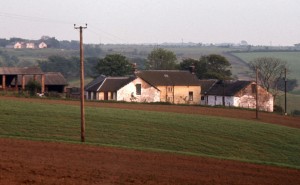 Tainhnach, an obsolete name for meadow. I’ve not discovered when the farm at Tannoch was built, but prior to a sale in 1869 the buildings are described as “nearly new”. In 1553 its lands gets a mention along with most other Cumbernauld farms in the Protocol Books of Dominus Thomas Johnsoun 1528-1578. 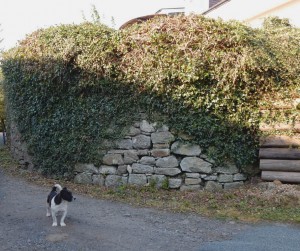 In the early 19th century, Tannoch was clearly at the centre of a thriving flax industry. The whole area known as New Monkland seemed be under flax cultivation at that time. Within a quarter mile of the farm there were two flax mills and on the farm itself there are indications of facilities for crushing flax using a system of stone rollers. When we lived there we always wondered what “the roundabout” had been used for. It had been filled in but the present owners excavated it and found a large mill-stone stone within. We can assume that flax was grown extensively on the fields around and that a roller system driven by a pony or horse was employed at Tannoch.

In Scotland, the bruising of flax was long performed with a hand-mallet, upon a smooth stone, and the flax bent and rub bed a little, to break the boon or woody stems, so as it might be separated from the flax by scutching. When machinery came more into use indented rollers were formed, to crush and break the flax still more completely. One roller, three feet diameter, moves in the centre, and two other rollers, each of fourteen inches diameter, operate on the large one. All the three are indented at least two inches and a half deep ; so that, when they are moved round, each of the concaves falls into the convex of the other roller, and the flax being spread thin, and the top end of it let in between the rollers, is carried round with them, and completely crushed and broken in going once round the large roller in the centre, which throws off the flax ready for the scutching.

Tannoch and the Flax Industry 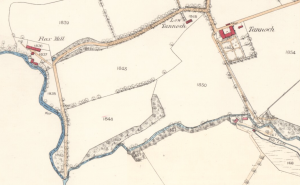 1864 map of Tannoch with the nearby at Tannoch Cottage (Dunbartonshire) –

Note the “roundabout” marked to the left of the main farm building.

1864 Lanarkshire map showing an extensive Flax Mill operation on the other side of the Rumblybugs burn. The burn at this point marks the Lanarkshire/Dunbartonshire border. (Note: The start of the Luggie is where the Cameron Burn and the Rumblybugs meet.

Who worked at Tannoch?

In 1839 James Young is recorded as the Head of the Family at Tunnoch. He was a flax miller.

In the 1851 census a John Anderson aged 36 is living at West Waterhead and working as a Flax Miller. As this census records another farmer in Wester Waterhead, I suspect that while John and his family also lived there, perhaps in a farm cottage, he probably worked at Tannoch in the Flax Mill. His wife Cathrine Anderson (29) was born in Falkirk. Children: John Anderson (2); Daniel Anderson (9 Mo); Infant Young Under 1m; Mary Young (22) Agricultural Labours Wife.

In Feb 1869, the Falkirk Herald advertises the sale of Tannoch Mill – a dwelling-house, lint mill, mill dam, lade and sluices – and an acre of land and “28 falls, Scot’s measure”. The seller was a Peter Aitken. This perhaps indicates the change in the fortunes of the flax industry and may well be the time that the Mill was purchased to become the Tannoch Chemical Works.

In the Falkirk Herald of 4th March 1869 the farm and lands at Tannoch are advertised for Auction on the 24th – 94 acres, thoroughly drained, excellent fences and farm buildings that are “nearly new” and substantially built and “the Plantations are thriving”. This sale was adjourned and re-scheduled for November 1869 with the added benefit of being just 3/4 mile from the new station to be opened on the Caledonian Railway (which went through in 1848). It was bought for £3830.00 by Colonel Buchanan of Drumpeller. 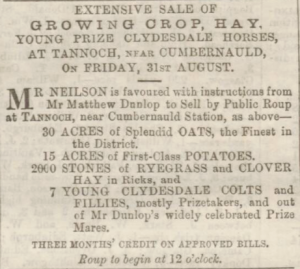 By 1877 Matthew Dunlop was at Tannoch and the farm was operating as a traditional farm where oats, potatoes, ryegrass and clover hay were advertised for sale. There were also 7 Clydesdale colts and fillies. It seems to have been quite an extensive operation by that time. This advert appeared in the Falkirk Herald on 16th Aug 1877.

A report in the Falkirk Herald in May 1889 indicates that it wasn’t all hard work on the farm. “Social Entertainment on Tannoch Farm – On Friday evening, the 17th May, a ball was held at Tannoch Farm, near Cumbernauld, attended by the ploughmen in the district, bordering on the Luggie Water, and their friends. After opening by grand march, dancing was enjoyed till 11 o’clock, when a company of 22 couples sat down to supper, which was purveyed by Mr Johnston, Greengairs, in his usual good style. After supper, dancing was continued with great spirit till an early hour in the morning, when the party dispersed highly satisfied with the evening’s entertainment. The music was supplied by Mr John Hamilton, violinist, Condorrat. Mr Thos. Wotherspoon, Blairlin, acted as master of ceremonies, and the committee consisted of Messrs David Patterson, Glenhove; George and David Keir, Sandyknowes; Thomas Wotherspoon, Blairlin; and James Braid, Waterhead. The use of Tannoch Barn was kindly granted by Mr Matthew Dunlop for the occasion.”

The 1907-1913 volumes of the Macdonalds Scottish Directory and Gazeteer, record a Thomas Gardner as living at Tannoch.

In Nov 1924 Tannoch was being sold by William MacFarlane with 40 stacks of Oats, 20 tons of hay, 9 acres of potatoes, 12 milk cows, heifers and calves and several Clydesdale horses. I expect it was purchased by Dan Reid, who then sold it to my father Gordon Fairweather in 1948. Dan Reid was fined in 1942 for failing to immobilise his car.

Flax Mills at Tannoch Cottage are shown on the 1864 map but the indications are that flax production had ceased by mid 19th century. The 1901 census for Tannoch Mill records a John and Mary Maxwell living there. John was a Wood Distiller and he is likely to have purchased the business as a going concern when it was sold in 1895. Their son George later established a Coal Merchant business at the Station. This is the site of  Tannoch Chemical Works later established on the flax mill site and shown on a 1910 map.

A wood distiller can be a term used to describe a person who either dries wood rapidly using heat, perhaps prior to making charcoal and/or produces wood-alcohol or methanol. The link with charcoal is interesting as during the 1950s and 60s the site was operated by Mark Dougall as a coal-yard. 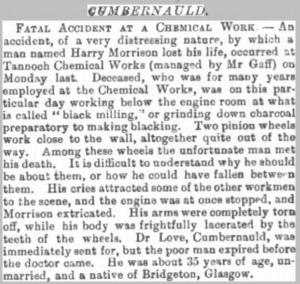 A report in Falkirk Herald of 22nd Sept 1891 reports the death of a worker by the name of Harry Morrison who was below the engine room where charcoal was ground down prior to making blacking. He was caught up in the gearing system and both arms were torn off. We can perhaps assume that the gears were water-driven using water from the Luggie.

Carbon black had various uses – as a pigment in paint or in inks for the printing industry and into the early 20th century, as  filler in rubber and car tyre production.  It is interesting to note that the man who was killed, had worked there for several years – and “was a native of Bridgeton, Glasgow”.  The site around Tannoch Cottage is now a rather unsightly scrap yard.

Personal Recollections: I began to attend Southern District primary in 1954. In these early days I walked down to Tannoch Cottage to await a lift to school from Mark Dougall’s wife Annie. I have a memory of her, more than once, trying to rapidly cool her tea by pouring it into the saucer. I guess I must have kept good time and perhaps more than once made her realise that she was running late! I can’t now remember how I got back from school.

Low Tannoch – shown on some early maps. Was located about 100yds west of the lane up to Tannoch Farm. Alexander Anderson is recorded as living there in 1912-13. Low Tannoch was part of the extensive Glenhove Estate. 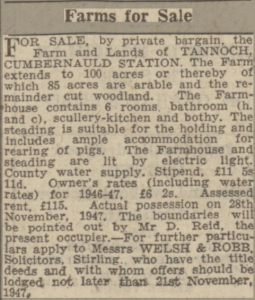 Recent Tannoch History
My father, with his brother and mother, purchased Tannoch in 1948 from Dan Reid. It operated as Fairweather Farms Ltd for 20 years. It was home – but a cold draughty place. Most winters I had weeks off school with chest infections, bronchitis and once a partially collapsed lung. But overall, happy days!
The farm was sold to Graham Rutherford in 1969 and was later purchased by Dawn Harrison to become the very successful Tannoch Stables. The old farmhouse has been wonderfully restored. 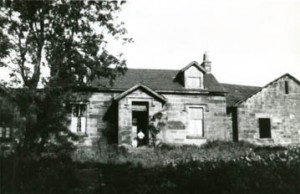 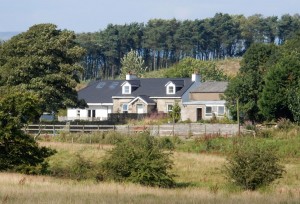 Much more could be discovered about the people who lived at Tannoch by searching Scotlands’ People – but that’s a bigger, time-consuming task.