A major feature at the Station for many years was the Cumbernauld Grain Mill. By piecing together various news snippets it would appear to have been built in 1903 by Robert Stirling. You can just about make out on the photo “Robert Stirling, Granary and Grain Merchant”. At this time he also applied to build a cottage, known as Millview which was later purchased by my grandfather Tom White. 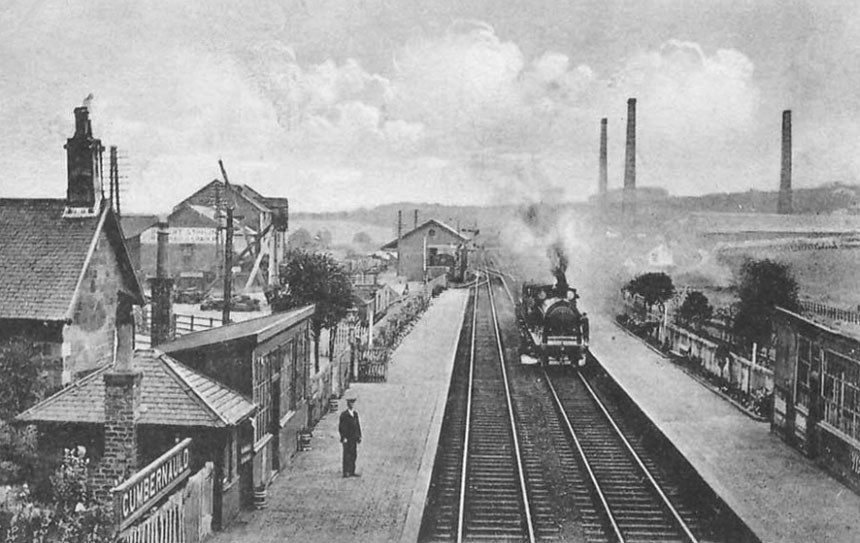 Grain Mill to the left of the Railway Station

Building – At a meeting of Dumbarton Eastern District Committee, on Wednesday, it was reported that there had been submitted to the sub-committee on Building Regulations plans for Mr Robert Stirling, grain merchant, Cumbernauld, per Mr James R Martin, architect, Kilsyth, for a cottage near Cumbernauld Station. Approved, subject to the observance of bye-laws and to the work being executed in accordance with the statement of particulars lodged with the plans….

Mrs Grace Stirling, Robert’s mother, was a grocer in 1893. In 1881 they lived at Lenzie Mill Cottages and his father Robert worked on the railways.

Big Blaze at Cumbernauld – The Southern District, Cumbernauld, was the scene of a big conflagration on Tuesday morning, when Mr Robert Stirling’s Grain Mills were completely destroyed. The premises were closed as usual on Monday night and were all right when Mr Stirling paid the customary examination about ten o’clock.
About two o’clock on Tuesday morning Mr. John Aitken, fireman at the Brickworks, noticed the buildings were on fire and gave the alarm. Almost immediately the whole place seemed aflame, and the roofs quickly tumbled in. With the absence of a water supply of any consequence near at hand, the requisitioning of a fire brigade was out of the question.
The buildings, which were comparatively new, being erected about eight years ago, were equipped for an extensive business, and consisted of three large blocks, comprising lorry and cart shed, engine shed, and general store in one block; machinery for hay cutting and for bruising and grinding graininess another; and there were also hay lofts, offices, and stables.
Fortunately the four horses in the stables were saved. The task of removing them, however, was one of extreme difficulty owing to the poor animals being so terror stricken by the unusual surroundings of smoke and flame that they were hardly able to move.
A couple of wagons which had been standing in the railway siding at the mill were also destroyed by fire. Of one, only the wheels and springs remained. At one time it was feared that the fire might spread to the goods shed belonging to the Caledonian Railway Company and to the premises belonging to Mr Frank Leckie, contractor, but fortunately the flames confined themselves to the Grain Mill.
It was remarkable the short space of time in which the premises were consumed after being first observed to be aflame. The cause of the fire is unknown. The damages are estimated at between £3000 and £4000 (£2.8 – £3.8 million) and are, we understand, covered by insurance.

The premises were eventually rebuilt and business resumed.

Staff Dance. On Friday, in the Parish Church Hall, the staff of Cumbernauld Grain Mills  held their annual dance, there being a large company present. The Star Orchestra were the providers of the delightful dance music and Mr Wm Bell was M.C. The catering was carried out by Mr John Brown in his usual tasteful manner.

I’ve not been able to discover when the business closed or when the buildings were demolished.