Kildrum along with Easter and Wester Carbrain (as named in 1792), Hole, Greenyards, Fannyside were part of the Estates of Cumbernauld. In the Caledonian Mercury of July 19, 1792 Kildrum Farm is advertised for let – “147 acres, inclofed and fubdivided”

In March 1796 Matthew Finlayson from the parish of Dunblane came to farm at Kildrum. He was the younger brother of Dr James Finayson, who became professor of Logic in the University of Edinburgh and a colleague of the celebrated Dr Hugh Blair, also in the ministry of the High Church, Edinburgh. About 1819 Mr Williamson left Kildrum after a residence of 23 years and went to Waterhead, where we believe he bought a small property and in 1827 took the farm of Carbrane. His son William became sole tenant of Carbrane and remained so for 40 years. (Extract from Falkirk Herald May 1870 reflecting on the life of William Finlayson)

In 1865 a “Cattle Plague” struck many farms in the area and 8 cows were removed, destroyed and buried in Kildrum. The actual disease is not defined but farmers had to dispose of all their animals or face heavy fines. Foot and Mouth may have been the plague described. 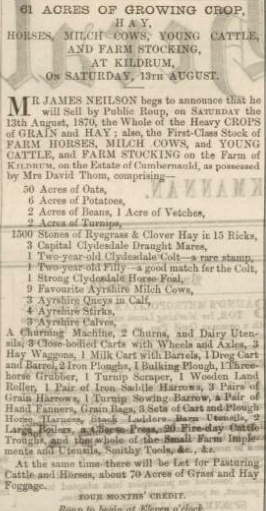 A Farm Auction in Aug 1870 is advertised in the name of Mrs David Thom. We may conclude that husband David had died and everything was up for sale  including “9 Favourite Ayrshire Milch Cows”.

August 1876 – a sale of potatoes is advertised in the Falkirk Herald by farmer Mr James Muirhead.

Falkirk Herald 12th June 1897 Preparations are being made for the Queen Victoria’s Diamond Jubilee Celebrations and Mr Muirhead is at the farm.

An influential committee is busy at work making the necessary arrangements for a demonstration of school children from Cumbernauld, Arns, and Southern District on the Diamond Jubilee Day. Mr Muirhead, Kildrum Farm, has kindly granted a field for the occasion, and the Camelon Band is engaged for the day. The inhabitants of the district are taking considerable interest in it, and subscriptions are coming in well. The School Board is also taking an active part in the matter, so that a successful day is anticipated.