As an increasing number of families settled in Greenfaulds it quickly became clear that the local schooling arrangements were far from satisfactory. The nearest school was in Cumbernauld Village – a distance of 2-3 miles depending where home was. This could be a miserable walk in poor weather with young children arriving at school wet-through and having to sit in wet clothes – and then have to walk home again. And all this often in complete darkness. So it wasn’t long before there was a clamour for a local school. But it didn’t go well. There was opposition from ratepayers and the local School Board felt there was adequate provision at the Village School. It ended up in a major confrontation and was eventually settled in the High Court. Local news reports at the time make for interesting reading.

Excerpts from a report in the Falkirk Herald on June 25, 1884

“Any unprejudiced person who knows the road between Cumbernauld railway station and the village where the school is situated must be convinced that it would be cruel to insist upon children of tender years travelling along that road twice a day in all weathers to attend school. Parents would be heartless indeed who, in rainy and stormy weather, would send their children to walk between two and three miles to sit for hours in school with damp clothing, and then walk back the same distance along an overexposed road. No School Board could prosecute parents for failing to educate their children in such circumstances….

… The Government Inspector, after an examination of the whole case, and hearing both parties, has reported that he has “decidedly come to the conclusion that a school under a female teacher for the younger children up to the third standard should be erected near Cumbernauld station.”

I am sure it must have been source of gratification to you to know that your able editorial, some time ago, re the lack of school accommodation in the neighbourhood of Cumbernauld Station, should have been so fully endorsed by the Education Department through their Inspector. Surely such an unbiased channel should satisfy our old friend “Ratepayer” that the information gleaned by the Falkirk Herald, which prompted its editor to devote some space to the ventilating of a clamant want was quite timeous and highly necessary, whether an apology is tendered to you or not, Mr Editor…

Perhaps it might be as well that petitioners and ratepayers should know that the chairman, mover and seconder of the amendment, reside 3 or 4 miles from the neighbourhood of where the school is wanted, and can have just about as little idea as the man in the moon of the educational requirements of the district. To be charitable, however, as ratepayers, they were perfectly entitled to object if they thought fit, but this is the best that can be said of the position they took up. I must say the Chairman of the Board put the matter very plainly, when he stated that a good reason for objecting to the school was the fact that there was still plenty of room in the village school. To my thinking, this is very lame. As I hold that supposing the school were empty, the Board are in duty bound to provide accommodation when the distance is so far a field and when the necessity for it is endorsed by the highest court. The neighbourhood of the station is almost the only part of the parish, excepting the extreme west or north west where healthy commercial vitality exists, and it does seem a pity that this vitality should in some measure be strangled by the very people whose best interests it is, for the sake of their parish, that it should flourish even more abundantly. The district gives a good living, and perhaps more, to a general store, and a restaurant, and also supports a post office. If these of themselves don’t point to the fact that a large population exists I wonder what will. It will be strange to me if the Education Department give the amendment of “reconsideration” the slightest consideration. With many apologies for the length of this yarn. 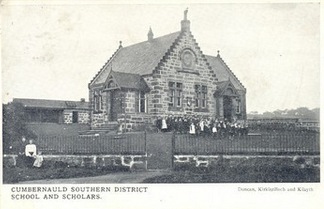 In 1886 the Southern District School opened and I remember from my days at school the date “1886” carved in stone in the apex of the roof. The first Headmistress was Miss Frew and her efforts quickly brought excellent results.

“Southern District School – in point of order, tone, and general efficiency, this little school makes a highly creditable appearance. The pupils are bright and intelligent, and their instruction is remarkably well advanced; the work of the 3rd standard in particular being both smartly and accurately done”. Grant earned, £35 3s. There were no failures. The instruction given does not go beyond the 3rd standard.”

For the new community, the opening of the school was transformational in more ways than one. Apart from being an educational facility it was quickly seen as a wonderful venue for local “entertainments” on alternate Saturday evenings. It’s a story that is at first uplifting but before long there was another serious squabble with the School Board.

Entertainment at the Station. – The first of a series of fortnightly musical and literary entertainments was given on Saturday evening last, in the Southern District School (kindly granted for the purpose by the School Board.) The school was crowded to its utmost capacity, many being unable to again admittance. Mr W D Murray, occupied the chair, and in a neat opening address, explained the reason for holding, and the nature of the meeting. The programme was a lengthy one, and occupied two hours, embracing solos, duets, quartettes, and readings; also selections on pianoforte and violin. It is gratifying to note that the talent was drawn entirely from the immediate neighbourhood of Cumbernauld Station, and we understand the committee in charge of the meetings, have pleasure in stating that the whole of the winter programmes will be completed without going far afield for aid. The district is nearly two miles from Cumbernauld Village, with a considerable working class population, for whose benefit and amusement the meetings are chiefly got up. The committee deserve every encouragement inter audible effort to wile away pleasantly and profitably the long winter evenings. A hearty vote of thanks, on the motion of Mr N Smith, the the chairman terminated the meeting.

These evenings were obviously a great success and people from all-over flocked to the Saturday entertainments – people from all walks of life, the gentry enjoying an evening alongside the working class. But it took place in a brand new school and within months the wear and tear to the fabric became quite noticeable with the result that the School Board withdrew permission. It’s not hard to imagine scores of people from the “working class population” turning up in their tackety boots. Imagine the effect that would have on new wooden floors.

Entertainments at the Station. The popular entertainments got up some time ago by a committee of gentlemen on alternate Saturday evenings in the Southern District School have been brought in the meantime to a close. The reason for this was apparently the criminality of them being too popular, and giving healthful enjoyment to about 120 people on Saturday evenings. The School Board, with their usual wisdom, have withdrawn the use of the school; and the reason assigned being that the property had undergone some scratches (which the committee had obliged themselves to put right, and all damages, when the school was originally granted). Rather a lame excuse for knocking on the head an institution which had commanded the sympathy and support of nearly all the ratepayers in the district; and in the long dark winter evenings gave pleasure and profit to young and old. Verily some of the folks of Cumbernauld have a lot to answer for.

Sir. Had the notice, which appeared in your last Saturday’s issue, in regard to the action of the Cumbernauld School Board withdrawing the use of the Southern District School for Saturday evening entertainments, been anything like correct, comment would have been unnecessary; but the statements made are unfortunately inaccurate and misleading.

It is alleged that the sole reason the School had advanced for putting an end to the meetings is, “the furniture had undergone some scratches,” whereas it is perfectly well-known that the permission was withdrawn in consequence of the entertainments committee having grossly violated the conditions under which the use of the school was obtained – conditions which they solemnly undertook to observe, but which they woefully failed to implement.

If the committee had been wise – but wisdom is not their strong  point – they would have quietly acquiesced in the Board’s decision, but when a garbled travesty of the case appears, which is calculated to prejudice and poison the minds of the inhabitants in the district against members of the School Board, it is only right and proper that the true reason why the entertainments have been discontinued should be made known. – I am, &c ONE WHO KNOWS

Letters for and against appeared until the Falkirk Herald on the 15th January 1887 published the following: “One who Knows” sends us a long letter in reply to the letter of “One who Knows Better.” We cannot spare space for the letter, but we may state that “One who Knows” maintains the accuracy of his former assertions, and declares that the conditions under which the school-room was granted for the Saturday evening entertainments were not complied with. The school-room, he says, was not properly cleaned after the entertainments – a form was broken, seats and desks were cut and deeply indented by hobnail boots, and the panels of the doors were seriously damaged. Having given the insertion to statements on both sides of this controversy, it must now cease, so far as our columns are concerned.”

What to do now that there was no venue for the Saturday entertainments? There was only one answer. Start raising funds to build a Village Hall.

CONCERT – A very successful concert took place in the public school on Wednesday evening, for the purpose of assisting the funds of the proposed hall to be built in the Southern District. Councillor John Longwill occupied the chair. The attendance was large and appreciative. The comic singing and sketches of Mr J. C. MacDonald, Glasgow, were the chief part of the concert. Mr Carlton Brown, tenor, Glasgow, sang with very great taste. Possessed of a light thrilling voice he chose songs quite within his compass and certainly left little to be desired in the execution. In every respect the concern was a success.

To continue the story of the Southern District Hall see the page devoted to that.